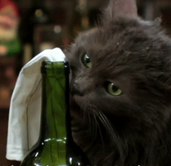 Czar's family moved to the States in the 90's from Yugoslavia, as refugees of the war. She was born in America, and speaks both Serbo-Croat and English fluently. She describes her ethnicity as Bosnian, Bosnian-American at some times. She is white-complected. She is a proud member of the lgbtq+ community, as she is pansexual. Czar is a Pisces with a Cancer moon, born on March 15th. She is INFP-T, Chaotic Good, and a communist.

Czar loves her notorious disrespect for grammar, as constructs of society are not enough to bind her ever-flowing stream of thought, despite her love for English and writing. She's posted much in the topic of the June 16th Food Craze, and about anticapitalism. She sometimes makes personal posts, but prefers the dark realm of shitposting.

Retrieved from "https://mastodonsocial.fandom.com/wiki/Necrobb?oldid=325"
Community content is available under CC-BY-SA unless otherwise noted.